We were eagerly waiting for our pre-ordered Ricoh Theta S to arrive. The dirt bike racing event, Red Bull Knock Out 2015, took place on the beach of Scheveningen, near our Tundra Tree headquarters in The Hague. A great opportunity to create some sick 360° video. Our plan was to use the Theta S as an action cam mounted on a helmet of one of the participants. Our 360° rig with 6 GoPros would be a bit too much for comfort in this case. It was not just a race on the beach, but also a race of getting the Ricoh Theta S in time. Unfortunately we lost that race and the delivery came too late. Luckily we have some great other upcoming plans as well for our new Theta S as well as for our 360° GoPro rig and for our 360° DSLR-rig (some really extraordinary footage coming up!)

First thing that immediately became clear, there is no need for a ThetaS-for-dummies-manual. The camera is extremely simple to use. No syncing, no stitching, no color correction, everything is ready out of the box.

The videos recorded with the Theta S are FullHD and extremely compressed. Not ideal for a hi-end production, but for simple 360° video or for testing for a bigger project it is quite acceptable.

Although aesthetics are not very important for a camera, it is obvious Ricoh put in some effort to give us a nice camera to look at. Even the box looks like we have been sent an Apple product.

This camera is ideal to quickly create a 360° shot and use it in a post on Facebook or upload it to YouTube. Ricoh offers a desktop application that will convert your movies to compatible 360° format for YouTube and Facebook. Although it sounds simple, we found the process quite time consuming. Firstly, there is no way of trimming the movies before converting them (why not Ricoh?) and trimming in YouTube result in the movies being non-360° anymore (why YouTube?) – you need to do this in some kind of video editor. Also the converting process in the desktop application takes ages. We can’t wait until it’s possible to directly upload 360° movies to YouTube, although Ricoh is definitely getting closer to this.

Because of the lack of many options, like manual stitching, exposure control, a less compressed codec, etc., we would not consider the Theta S to be a 360° camera for hi-end professional use. No man over board though. The camera fills a gap which makes 360° video more accessible to everyone, which is a good thing. The more people get familiar with 360° video the better it stimulates the development of it. 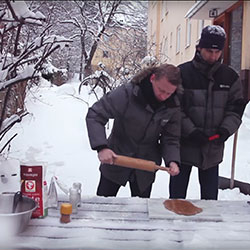