This year’s total eclipse took place over the Faroe Islands. For a marketing campaign we were asked by one of our clients to film this celestial event… from an airliner!

We chose our favorite camera, the Sony FS700, because of its onboard ND-filters and its flexibility (we didn’t know what to expect since we had never filmed a total eclipse before).

The flight started from Amsterdam. It took us about two to three hours to arrive at the exact location and time, where experts had calculated would be ideal to do an eclipse run. The plane made its final turn and through our special glasses we could already see a bite out of the sun. Slowly the world below us turned dark…the shadow of the moon shifting in front of our star. The moon, now the exact same diameter in the sky as the sun, created a stunning display. Telephoto lens, vibrations of the plane and extreme contrast in lighting – filming it wasn’t easy. Luckily we anticipated this, hence the FS700.

The majestic shadow traveled slowly, although in reality it moved with enormous speed over the surface of the Earth, until the sun was completely blocked. Only a ring of light and the sun’s corona were visible through the lens. In real life it looked even more amazing. One really feels that we are part of a bigger system of planets, moons and giant stars.

Even though we journeyed with the shadow, after 2 minutes it overtook us and the sun became bright and visible once more. We returned home, back to Amsterdam, with the precious film footage. An experience we will remember. 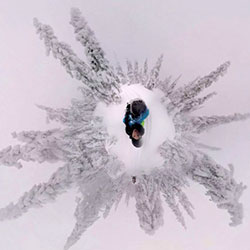 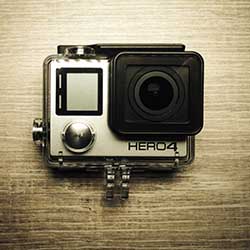